Photo blocks… crafting something I wish I had crafted for my own kids when they were babies!

In a few weeks, I’ll be traveling up north to visit two of the cutest babies alive, my niece and nephew.

What to make them, what to make. I have been thinking lately about photo blocks… wishing I had made those for my kids back when they would have played with blocks… 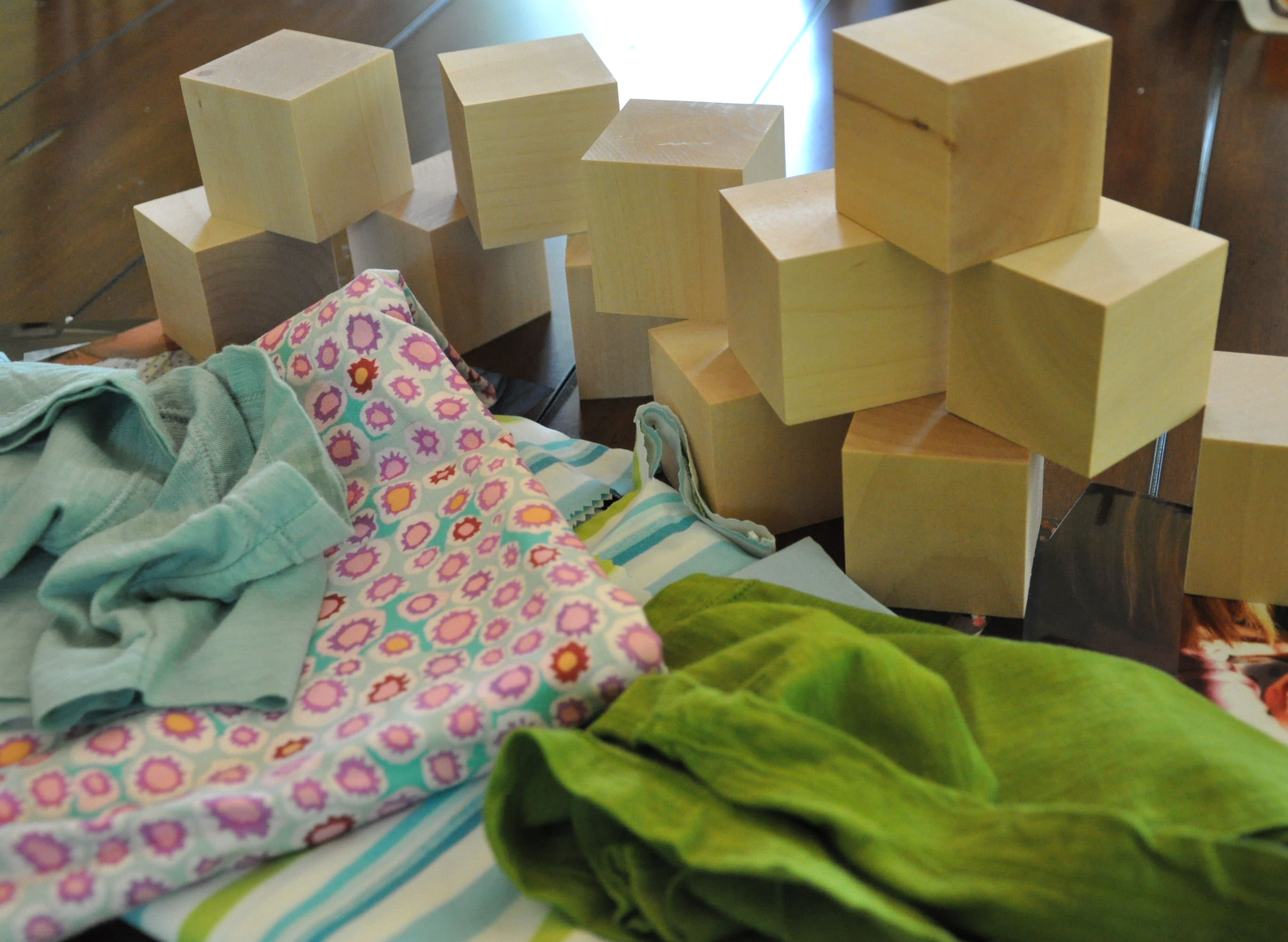 Well, I finally realized that that is what nieces and nephews are for! The next best thing to crafting for your own child!

So, in a sudden brainstorm, I decided to combine making photo blocks with this awesome tutorial by MADE for a hobo sack to give them in.

Here are the raw materials… some wooden blocks, photographs, and cute cotton prints… let’s see what I can do!

If you are wanting to make your own set of photo blocks, follow along! I apologize that I don’t have more pictures of the process… I didn’t think until afterwards that I would make a post about it. But! You don’t need pictures… I give you something more valuable! LINKS! Links to other peoples tutorials!!!

1. Purchase wood blocks from Casey’s Wood… an awesome on-line raw wood resource. I got the biggest blocks possible in solid wood (so that they were not a chocking hazard for babies) and made 6 for each child.

2. Paint each block any color… I used 6 different colors and sanded each block lightly down prior to painting. After the blocks were dry, I cut a picture for each block. All you do is put the block over the portion of the picture you like, trace around the edges with permanent marker, and cut that square out.

3. I then glued the pics on one side of each block using Modge Podge, a non-toxic glue and sealant.

4. After letting the pictures dry, I sanded the edges down again, to give a distressed, shabby chic feel to the blocks, and also to further round the edges for safety. 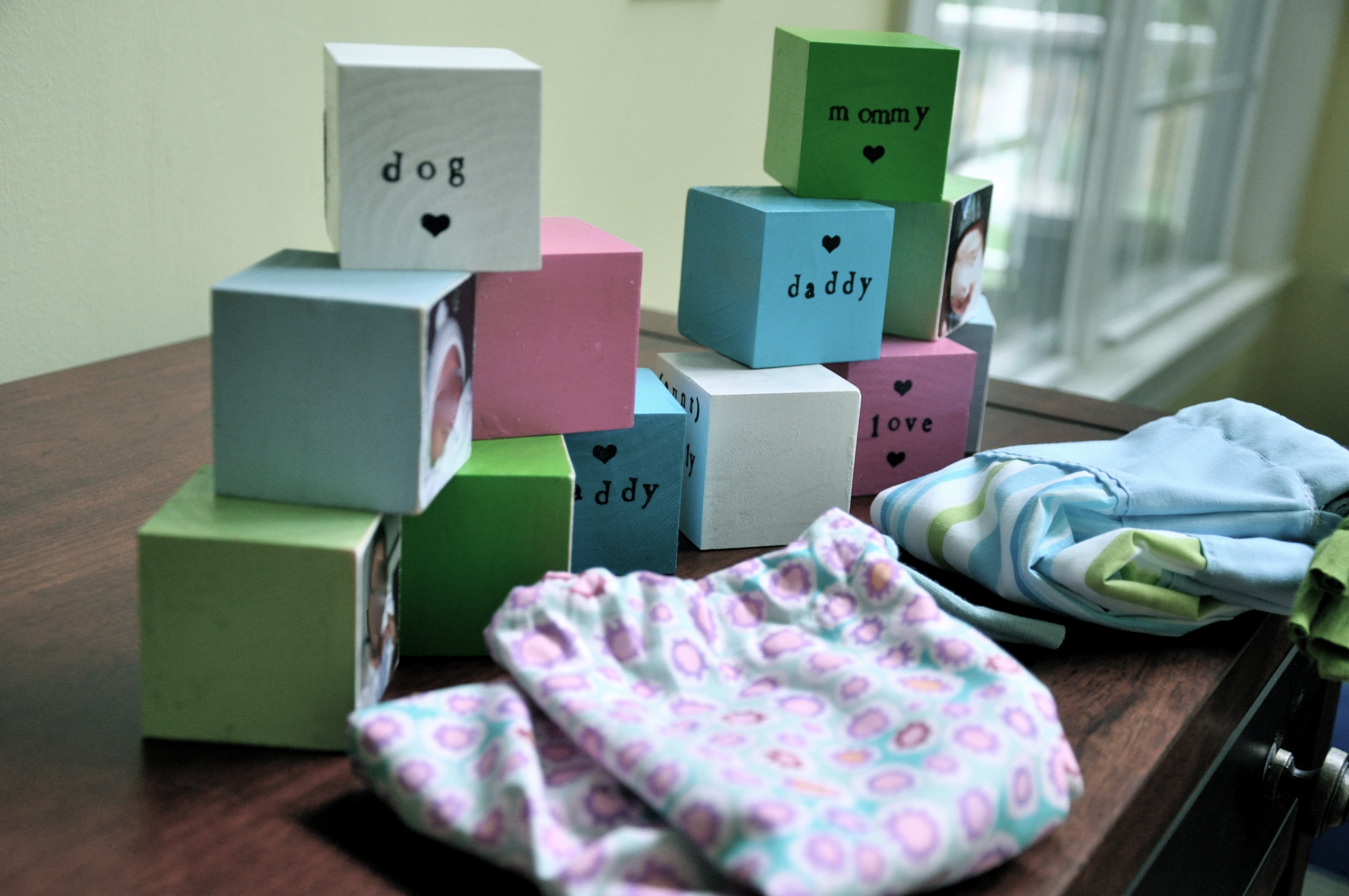 6. Then, making sure to blow all the sawdust away, I painted a thick layer of Modge Podge over the entire block — all of the blocks — to seal in the color and the picture.

It will look white when you paint it on over the picture, and you’ll freak out a bit, but then it dries completely clear.

I would recommend using Matte Modge Podge for this project, I’ve found that Modge Podge Gloss tends to leave a pit of a stick to the finished project, and I don’t want these blocks to be sticky. I imagine they will be sticky enough when covered with drool and spit up from the babies 🙂

Here are some links to other photo block tutorials… they all have their own modifications.

This one uses rub on letters and much smaller blocks, making them (in my mind) non-child friendly, but awesome for decorative purposes.

This one uses the same technique as I do, but makes them into plaques that you can hang! Awesome!

8. Using the above mentioned hobo sack tutorial from MADE, I made little carrying cases for the blocks.

You can use any fabric you want, I went with a cotton print.

MADE has a fabulous, very clear

tutorial for this project, so make sure you follow what she says and not what I’m blathering on about here. BUT. I did make one modification to make the hobo sack totally baby-proof.

I was a bit worried that the ties would pull out from the hobo sacks if I made them the way that Dana did, and I didn’t want any chance of a choke hazard. God forbid.

SO… I only made the little opening on ONE side of the top (she has you make two openings in the casing… I just made one) and I pulled only one drawstring through. Then, instead of tying each end into a knot, I tied *both* of the drawstrings *together* so that there is no way they could be pulled out. They make one continuous loop. You can see what I mean in the picture.

10. Take pictures of the product and post it back to me so I can see your fabulous results!

My pics could have been even cuter, but I was trying to obscure the pictures on the blocks for privacy for my extended family. BUT! I will have pictures for you soon of *my family* — we are going to get family pictures taken this afternoon — yea!!! I am going to get some head shots of me for my upcoming children’s book… and for this blog. So look for a picture of me up here soon! Have fun with this project, and let me know how it goes. xoxo