My trip outside of the Universe (warning… gotta suspend judgment to make it through this post!) 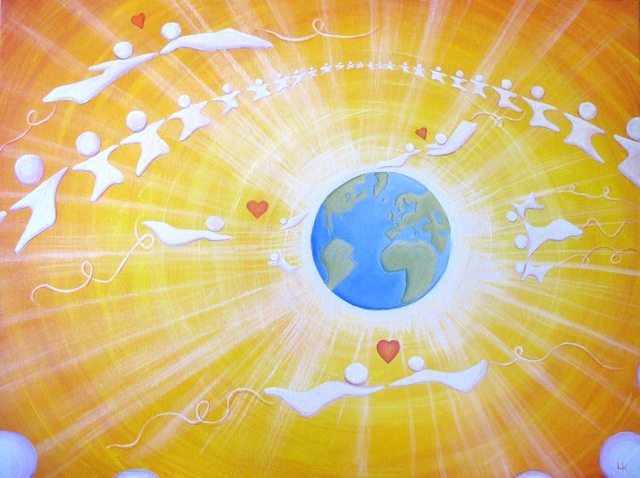 You might have to bear with me for this post. I feel like I’m taking a risk sharing this with you here… not the typical blog post you might expect from a rational sane educated woman… so be kind to me here. I just feel moved to share with you this crazy daydream I had. You could call it a vision… a trip outside of the Universe.

No drugs involved, I swear. What got me there was love. Pure love! Let me explain:

I was driving with my kids and listening to music and hearing them chat back and forth as we drove, and as happens quite often, my heart was suddenly filled with love for them. Physically full of love… so full it was bursting.

Full of just total and absolute gratitude that they were both in my life.

Usually during these *attacks* of joy I hold my breath and smile and sort of internally squeeze my heart in a hug around this joy. Sort of suppress it inward.

Today I decided to let the love radiate outwards… just release it and see where it went.

I literally felt my heart expand and fill the car… then I saw it expand to cover my little town and then it grew to cover my entire state. I kept letting it fly, not getting in the way, just feeling it expand.

This was new for me. I felt it cover our entire country, then expand out to fill the entire planet. It kept wanting to grow so I went along for the ride… I saw it expand outward and fill our solar system, our galaxy, and our entire universe.

My heart kept expanding outward and I figured that since I have absolutely no idea what happens after you pan out to the entire universe, this is going to get interesting.

I started to see the sides of space curve as my heart expanded past the outer limits of space (I didn’t know there was such a thing!) and time became a non-reality… the very second my heart expanded out past the confines of space and time and *matter* as we know it, I felt incredible… an expansive feeling I had never ever had before.

The closest thing I could relate this feeling to was like the feeling I had when I had just given birth to my first child, and after she was pushed from my body I took the first deep breath I had taken in months and it surprised me so much… with Clara taking up so much space in my abdomen, I had been breathing more shallowly then I realized, and with her out, I wasn’t expecting it but I found I could instantly take the hugest breath imaginable.

I distinctly remember taking this first breath like it was the first breath of my entire life — the fullness of it and the lightness of it was unexpected and delightful!

As I expanded out past the outer limits of the universe, I felt and fullness and a lightness I had never known before. Unexpected and delightful.

My heart kept expanding to see that our entire universe was being held in the palm of the hand of a beautiful, shining soul. There were many many souls all gathered around, looking down at our universe and chatting and exclaiming happily about what was going on down there. There was much delight and laughter and conversation.

The first thing I realized was how cool it was that even though there were so many souls around, each one was unique and completely distinguishable from each other and instantly recognizable to me.

The second thing I realized was how much FUN they were having as they looked over our universe… I could hear many of them excitedly planning their visit and looking forward to what they wanted to do on earth.

The interesting thing was, that they were not all wanting to live a luxurious life or even a peaceful life. Each was looking at our world and seeing different things that delighted them. Some were excited to experience things that we would perceive as negative or sad… fighting in battles and getting illnesses and dying. They were excited just to be able to come down and experience the physical world… eat food and run and swim and jump and climb.

The closest way I can describe it was that they were thrilled at the idea of coming down to have fun and play!

Just like if we were to take part in a movie… some of us would think it was more fun to play the bad guy or the villain then the good guy or the sweet boring neighbor.

I always thought the actor in Harry Potter that probably had the most fun in filming was Voldemort, even though he is absolutely one of the most horrible characters ever invented. Just the fun of playing a role, any role, and enjoying it all along the way… no matter how story line went.

If you knew you were only acting, even the tragic death scenes would be fun to play.

This is how they felt too. They knew it was all an act, that would be short lived and fun to experience, returning them ultimately to this amazing expansive and limitless state once again.

And I wondered, having just felt this incredible expansive freedom when leaving the constrains of the physical world (where we are bound by the parameters of time progression and gravity and mass) why anyone ever would want to leave this amazing lightness of being and this interconnected pure positive energy state to go down onto heavy heavy earth… where gravity pulls us down and words are mumbled and bumbled and we communicate so thickly and so slowly with our mouths and move so heavily with our bodies… why would we give up expansive freedom for this limited physical *reality*?

I witnessed the answer first hand. Because it is fun. They wanted to experience it, temporarily, and enjoy it.

Without the fun of it, no one in their right mind would ever leave this total light filled and love filled sanctuary to come down to earth. But the expression of life on earth is joy and fun, when we allow it to be.

It was the most intense vision I’ve ever head and one that I can still *feel* when I remember it.

Why is this post called Part 1? Because as I was describing the vision to my children and telling them exactly where my overwhelming love for them had led me, my daughter had the best analogy I’ve ever heard, better than the ones I was able to come up with and share with you today. It was so awesome that I painted it.

I will save that for this Wednesday… it’s worth coming back for!!!!

I just think it’s so cool that when I focused on the love I had in my heart and I let it guide me, it led me right to the eternal source of true love and happiness, the interconnection of our souls and this positive anticipation of FUN. That’s where love led me that day… I guess that’s where love leads us all, when we allow it. I just had to remember to allow it to expand instead of trapping it in. xoxo