The Power Of Hope (+ Free Poster)

Several months ago I attended a medical seminar where one of the presenters, a warm and kind physician who was presenting a lecture on diabetes, made an off-hand comment.

He was showing a slide about a recent medical study conducted on Type 2 Diabetes.

The slide showed that all of the study participants did better than the general population.

Everyone improved, whether they got the treatment that was being tested in this study or not.

That means even the baseline participants, the ones who got absolutely no medical intervention whatsoever after signing up to be part of this study, had outcomes that were better than those who did not sign up for the study.

He was joking and said:

“People who volunteer for medical studies tend to do well…

… so if you get a chance definitely volunteer for a medical study.”

There was lots of laughter among the health professionals in the room, who all know and appreciate the power of the placebo effect.

Everyone was chuckling over the well known benefits of the placebo effect.

Everyone in the room knew that when folks believe in something, it has the power to heal you.

Everyone knows that when patients feel that it is possible to get better, they can.

It is called hope.

This is what the placebo effect is… it is the effect of HOPE.

Medical professionals tend to discount the placebo effect, or make light-hearted comments about it and discard the results as incidental.

It’s not the same thing as doing nothing.

It’s not the same thing as baseline… discountable.

It is joining in on something or agreeing to an effort that might ultimately be have a beneficial outcome.

In order to sign up for a study at all… you must have hope and at least a baseline belief that doing so may possibly be worthwhile.

This is not coincidence.

The placebo effect is not a random outcome.

It’s because the participant has hope.

Hope… coupled with the intention to heal… is a very powerful duo. 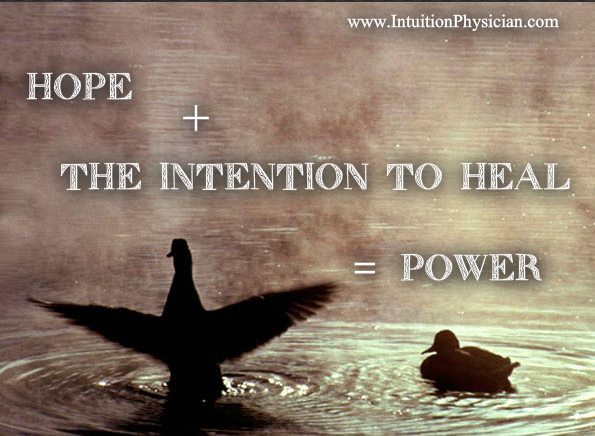 Print out this poster: Hope Is Powerful and hang it where you will see it each morning, to remind yourself of your own inherent power to heal and your own incredible, unexplainable, immense ability to have a better outcome then ever expected.

With much much love to you all…