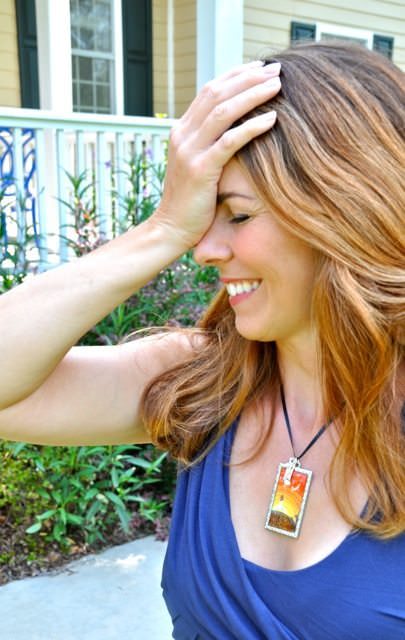 My kids recently asked me what was the most embarrassing thing that ever happened to me.

Well, lots of them I had to censor for my kids… and don’t particularly want to share on the internet, either.

But once I started really digging into the G rated stuff that I could share, I started laughing so hard with them, and it felt soooo good. Hearing them laugh along too just had me breathless with joy.

I told them about the time when I was twelve and I was on a family trip with my parents and brothers. We were headed out of the hotel room to go to dinner, and on the elevator ride down to the lobby I could tell my parents were whispering about something but I didn’t know what. When we reached the lobby and were walking through it to go out, my dad told me to look down.

Yep, I was standing there in underwear. Seriously.

Preteen and self conscious, I screamed (thereby convinently drawing even more unwanted attention to myself) and hammered on that elevator up button for what seemed like hours before it came and I dashed inside.

When I was a teenager and I was just starting to be interested in boys, I was walking with my best friend Kristin and we were chatting with two boys. It was the first time I really talked to a boy that wasn’t my brother or a childhood friend. One of them offered to give me a piggyback ride and I was thrilled.

I jumped up on his back and as he reached his hands around to hold me up, I remembered that I was wearing a ginormous pad (it was one of my first periods, and it was one of those old-fashioned ones that were I swear at least a yard long and just about as thick) and yep, landed my pad covered bum right in his hands.

He dropped me like a hot potato and I (not for the first time or last) ran away burning with embarrassment.

Oh, and then in college I was taking a modern dance class and we were supposed to be taking turns leaping across the room one at a time to the music.

On my turn, I started to trip, which isn’t that big of a deal if I would have just fallen down like a normal person. No, I had to somehow keep myself alive the entire way across the floor by doing all kinds of twists and gyrations and crazy manuevers… at one point I swear it felt like I had tumbled onto my head, rolled over, popped back up, skidded, twisted, cartweeled… all the way across.

And even that wouldn’t be so bad, except that we were doing it one at a time and there was no way anyone in the room missed it. Being a dance studio, all four walls were covered floor to ceiling in mirrors, so even if you had your back to me, you’d have seen my fall-that-would-not-end in about fifty different reflections.

To top it off, half of the football team was taking that dance class with me (their coach was making them to improve their balance) so most of the class was male. The entire studio was dead silent, just awkward music playing on and everyone staring… then I looked back as I headed out the door and saw the worst part of all… I had left a streak of black rubber a mile long, all the way across that entire studio floor from my black dance shoes. Not from the bottom part of the shoe… no, that part is non-marking. It was from the top part of my shoe, I don’t know how… my feet were somehow dragging upside down and sideways and just scrapping black leather off all the way across the studio. I looked down and there was barely any shoe still left on my feet… just some sole and shoe laces dangling.

I swear they must have been scrubbing that mark off the floor for years.

In medical school, when I was dating my husband, we had gone out to a comedy club one night and watched a pretty funny comedian. The next day in anatomy lab, we had several very conservative, frumpy, older gentleman physicians walking around helping with the dissection and I swear one of them looked like the comedian from the night before.

Common sense would tell you that it probably wasn’t the same guy, right?

But my brain wasn’t firing that day, and I walked straight up to that anatomy professor and actually clapped him on the back and screeched, “You were awesome last night! Really funny!” He and about a dozen of my classmates just froze, and it dawned on my that the guy teaching me human anatomy probably *wasn’t* the guy I saw on stage in a Philadelphia theater the night before.

And on and on. Really, I’ve made an idiot of myself no matter what age and where I’ve been. And I’ve never been more thankful for that then today, cracking up with my children and seeing it all from a new perspective. All of those things that I wished I never did? I’m so glad I did. They are the stuff that I love to look back on and just laugh out loud for the whole world to hear.

I love my life! I’m so glad it doesn’t go smoothly, and I’m so glad for the laughs along the way.

Here is to laughing at ourselves! xoxo