This one is a disturbing one. If you want to think happier thoughts, just click on over to Martha Stewarts blog or some craft blog… because today’s topic is a bit of a downer. I wanted to share with you a very recent, hot off the press research finding that was published only two weeks ago in the scientific literature. It concerns cell phones.

Cell phones are part of our world. If you aren’t talking on one, chances are the person sitting five inches from you on the bus or train or standing next to you in the check out line is. 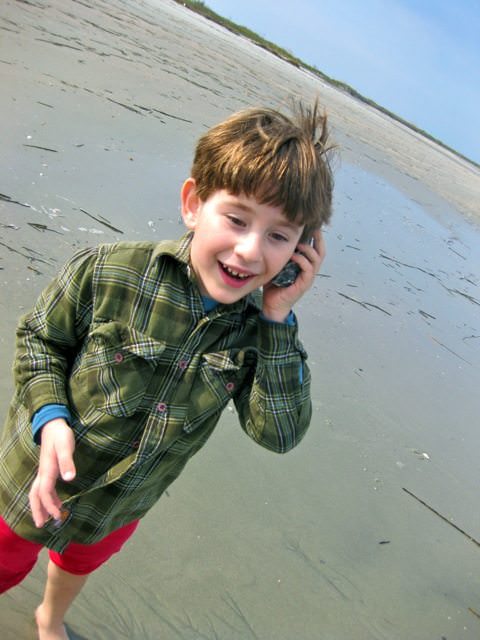 My sweet son talking into a “shell phone” a year an a half ago, when he was 6

And I must add that I *want* cell phones. I can’t imagine a parent who doesn’t want their teenage child to have access to call for help, call for them, call for 911 if they need it in an instant. I not only want my children to use cell phones when they get old enough to go somewhere without me, I will demand that they do. Especially when they are new drivers… I’ll expect them to check in quite frequently. I don’t know how my poor parents were able to keep their sanity when my older brother and I were teenagers… out in the middle of the night, driving in our own cars… I shiver to think of my kids doing half the things that we did, and with no ability to call for help.

On top of that, as a physician, my sweet husband literally can not be on call without a cell phone. It makes me sad to say, but he literally has it on his person every moment of the day and night, unless he’s in water. He actually sleeps with his cell phone/pager clipped onto his pajama pants. Thinking of that now makes me tear up for him and his incredible dedication to his patients.

Yet, even while I sleep next to the man that I love who has a cell phone strapped to him all night long, I know that I’m no big fan of cell phones. Not really. Not from a health perspective. They have long shown that cell phones have caused an increased risk of brain tumors on the same side that folks talk on their cell phone the most. (Oh, this is a good time to mention that ALL cordless phone are included… not just a cell phone but any phone that has a receiving device in the phone itself… not transmitted through a cord but transmitted directly into the phone. I’ll use cell phone for simplicity, but know I am talking about any blue tooth/cordless phone type of device.)

A new, even more disturbing study published on Feb 23rd, 2011 in JAMA, might indicate why.

Researchers from the National Institutes of Health used positron emission tomography (PET) scans to watch the brain during cell phone use. The participants were passively listening to cell phones in the one position, while the phone was receiving communication. The PET scans showed abnormal glucose metabolism on the side of the brain closest to the cell phone, in the orbitofrontal cortex and the temporal pole areas of the brain… both areas that are close to where phone’s antenna meets the head.

This is the first study to definitively show that the electromagnetic fields of cell phones abnormally accelerate brain metabolism. In other words, even when you are just passively listening on your cell phone, unilateral areas of your brain are hyper-functioning… increasing the metabolism of glucose on the side near the phone… which could explain the growth of brain tumors on the side of cell phone use.

Now, to be fair, the increase (during listening) was not extremely high. It was equivalent to the activity that would be shown while talking, for example. Yet you are not talking. You are passively having your brain activated, and only unilaterally at that. In addition, what happens when you are actually talking on the cell phone? Does your brain activity double on that side? More research is clearly needed, as this baseline study was done without talking so that the result could be crystal clear, and not marred by the functional brain activity of the study subjects. If they showed an increase and the participants were actively talking, it would be hard to interpret as soley from the cell phone, since each brain will light up slightly differently when the participants are actively involved in communicating/talking. So for this baseline study, they had the participants passively hold a cell phone that was on and functioning… and this alone was able to unilaterally abnormally stimulate brain metabolism.

The disturbing thing about this, to me, is the implications this might have on younger folks. Pre-teens and teens who still are actively developing their brain and neuronal connections, still have a very plastic and malleable brain. What will this abnormal electromagnetic stimulation do when it is presented over an entire lifetime? Children these days have literally grown up with cell phones around them… and they are the first generation to do so. This electromagnetic stimulation is not one that human beings have been subjected to while their brains were still developing, in past generations, including our own. 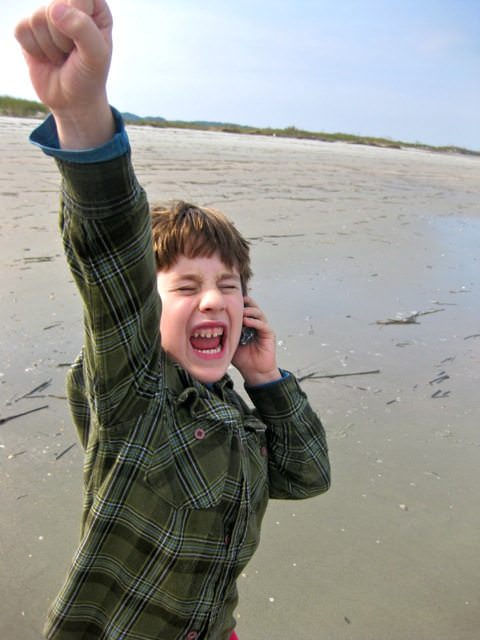 Food for thought. Luckily, there are some very very simple things you can do to remedy this exposure. Results from other studies show that if the phone is over one foot away, it does not appear to have any effect on the brain. So, using the phone in speaker phone mode would effectively remove the exposure. If we can counsel our children (and our selves) to place the cell phone down and talk through speaker phone, we completely remove the stimulus. Likewise, hands-free communication (like talking through your car’s On-Star phone instead of your cell phone) puts the receiving device through your car’s antenna and not directly through a phone held to your ear. Making the choice to use hands-free and speaker phone options whenever possible will greatly reduce your risk of altered brain metabolism. As, of course, will any phone that connects to the receiver with a cord.

It’s unlikely that phones with cords will be making a big comeback, so raising our children now with the knowledge that they should switch to speaker phone when possible will be important, until alternative healthier phone devices become available.

So what say ye? Are you likely to switch to speaker phone?

I have to admit I’m not a phone person… I spend less then 20 minutes a day on a phone and very rarely have my cell phone on. Still… I very much plan on having my children carry cell phones as they get older, so this was important and relevant information for us in our household. As for my poor husband… well, I’m just thankful that his office phones are corded phones. Because I know that cell phone/pager clipped onto his PJ’s is here to stay. xoxo