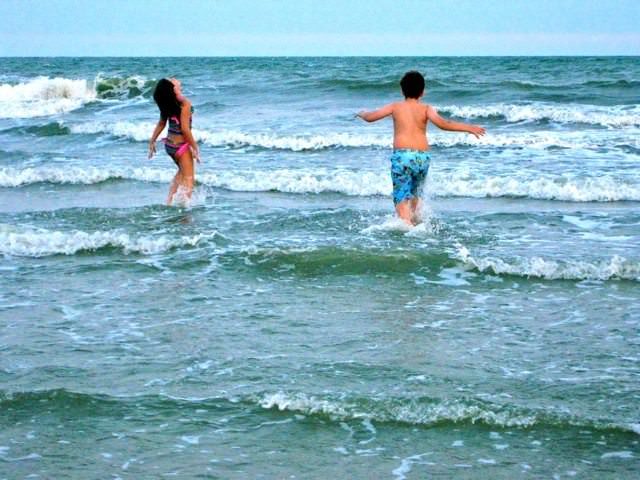 My two sweetie pie children at the beach. Okay, this may be a stretch to include in the fish oil post, but hey… you know there are fish in this pic… and what else am I gonna use as a visual?

I feel like I am trapped in backwards world.   Honestly.

We’ve known for quite a while that Omega 3 fatty acids are absolutely fabulous for the body… especially the brain… so you’d think this study, which shows Omega 3 supplementation is an effective treatment for ADHD, is no big surprise to the medical community.  Wrong.

The motto I learned in med school was “Fish Oil: from Womb to Tomb”… meaning fish oil supports our health from while we are inside our mothers bodies to the last day of our lives and every single day in between.  Everything, and I mean everything, works more smoothly in our bodies with fish oil… skin is calmer, hair is shiner and softer, our cardiovascular system is more resilient, our joints are more protected, our muscles get less sore and recover from stress and injury faster, our chances of senile dementia lessen… incidences of stroke and heart attack decrease… it’s just fabulous, whole-body-anti-inflammatory stuff.

So when the Journal of the Academy of Child and Adolescent Psychiatry published the results that Omega 3’s were effective in treating ADHD, I figure it made perfect sense. Support the brain so it functions best.

Um… side effects? Like what… not needing the prescriptions any more? Or like decreasing your child’s lifetime risk of heart attack and stroke? Maybe side effects like softer skin and hair and less inflammation throughout the entire body, including the brain?  Hmm.  The only common “side effect” from fish oil is softer stools and burping, depending on dose.   If your child experiences softer stools from fish oil, you can just cut back on the dose.   For some of us more constipated souls, more regular, normal stools from fish oil are just another welcome side effect.

Am I the only one trapped in backwards world here?  The physicians are more suspicious of fish oil then they are of a prescription medication in a young child?

The prescription meds they are using to treat ADHD, both the stimulant drugs and non-stimulant drugs, have side effect profiles that read like a horror movie… hypotention, bradycardia, heart block, syncope, sedation, and somnolence. Let me see which I’d rather risk… heart block in my child or a burp?

These results are so exciting, because the “small but significant” effects seen from Omega 3 supplementation (and in particular, eicosapentaenoic acid) were seen to be effective in studies that were as short as 7 weeks long, which means Omega 3 supplements work quite quickly in helping treat ADHD.  You may notice a supportive difference as early as two months on fish oil supplements.

They looked at close to 700 children on Omega 3 supplementation from 7 weeks to 4 months and found a significant improvement in both measured inattentiveness and hyperactivity… as measured by clinicians and as reported by the parents of the children in the studies.

Previous research has shown that there is a difference in Omega 3’s in both plasma membranes and erythrocyte membranes of ADHD patients as compared with their healthy peers.   So supplementation would make sense, based on the fact that it would help rebalance and stabilize those membrane imbalances… as well as act as a general anti-inflammatory to the central nervous system at large.

Not only is this large meta-analysis study going to be great news for families who have failed “conventional” medical approaches (meaning medicating them with Rx hasn’t worked) but also to families who are hesitant to risk the crazy toxic side effects offered from prescription meds.

Other great all natural treatment ideas may include homeschooling. I’m personally a big fan of homeschooling in general… and in particular, children with “ADHD”… I don’t see ADHD as a bad thing at all. The bad thing is boxing these bright and multi-focused children into a square.  Removing the child from the square would remove the need to “medicate” in the first place. 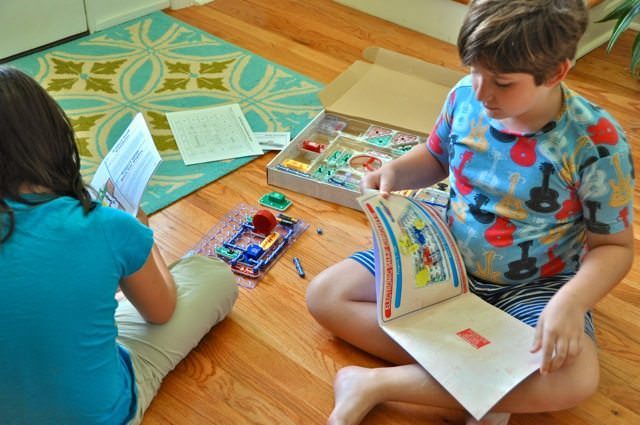 Learning what they are interested in, in the style they want to do it.  On this day, it was experiment with electricity while sitting in the hallway by the front door and staying in our pajamas.  Perfect!

Learning to live with and even thrive with each childs own learning style and see it as a strength in the long run will help these unique children thrive in life.

My recommendation for ADHD children is to homeschool them and to give them lots and lots of fish oil. Keep going up in the fish oil (or other Omega 3 supplementation) until they have stool softening. Then back down just slightly from that level dose, and stay there.

And my recommendation for non-ADHD children?   Homeschool them and give them lots and lots of fish oil. Or at least do the fish oil 🙂 They’ll be thanking you when they have fabulous skin, hair, brain power and digestion well into their senior years, and less chance of stroke and heart attack.

Oh, and since I am sharing supplement recommendations, their favorite probiotic supplement is Rainbow Light Probiolicious Gummies with 1 billion CFU probiotics and prebiotics in an all natural cranberry flavored gummy.

Both are gluten free, tree/nut free, egg and milk free.