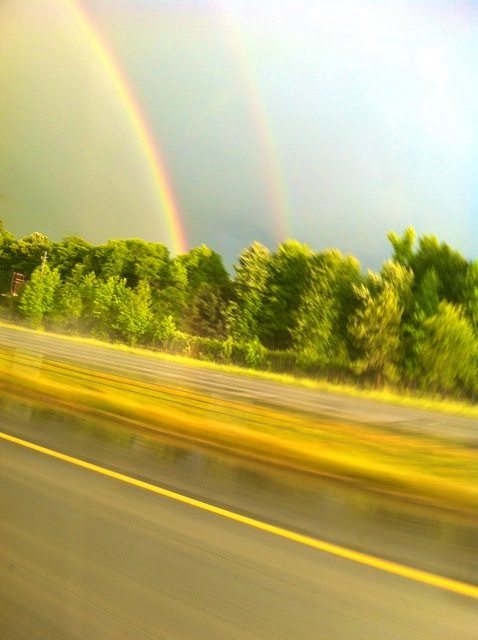 (We saw this double rainbow out of our window when we were driving in the rain a few weeks ago… my hubby was driving and I snapped this blurry pic to capture the magic!)

Alzheimers runs on one side of my family, so this is a topic very near and dear to my heart. I’d like to do whatever I can while I am still mid-life to protect my brain as much as possible from developing this devastating disease.

Thankfully there are some very simple things you can do to boost your brain’s health and help ward off Alzheimers.

Here are the latest recommendations found in the medical literature:

Better eaten uncooked... such as drizzled into salad dressings or used as a bread dip, or mixed into pasta, olive oil has a low flash point so it breaks down into oxidized (read: unhealthy) by-products when cooked and is better for raw consumption.

Yes this is weird… alcohol is widely known for its brain toxicity (fetal alcohol syndrome… alcohol induced blackouts… need I say more?) but in small quantities, alcohol has been shown to actually decrease Alzheimer’s risk.

One glass of alcohol a few times a week… yep, it’s brain protective.

Another fantastic oil, this one is not only important for head to toe health (if you’ve ever read my Skin Happiness Book you’ll know I dedicate — literally! — several pages to touting coconut oil’s amazing benefits…) but has the ability to feed your brain.

Able to cross the blood brain barrier, coconut oil directly provides easily accessible food to the brain. Some docs are reporting that eating coconut oil has helped stabilize and even reverse Alzheimers in patients.

Large studies have not weighed in yet (although I’ll report it to you here the minute they do!) but some reports say that giving patients who already have Alzheimers a few tablespoons of coconut oil feeds their brain and temporarily boosts their comprehension. Many folks recommend starting and ending each day with a large scoop of coconut oil for patients who begin to show Alzheimers disease.

But instead of waiting, since we know that coconut oil is a superior food for the brain, I like to incorporate it’s amazing-super-antioxidant-powers and healthy brain-loving-fatty-acid-profile into my diet whenever possible. If it helps feed the brain so much it makes an impact on an Alzheimer patient, imagine what it can do for you right now!

My fav coconut oil recipe… oh, it’s nothing short of magic… magic shell, that is!

I just melt mine on the stove (as I don’t believe in microwaves) easy peasy… try it and I know you’ll love it, as will your kids!

In addition to eating it I love love love to slather it all over my body and my skin loves me for it. I don’t call my skin care book Skin Happiness for nothing, you know!

It’s antibacterial, antifungal, and powerful antioxidant properties will not be denied, peeps.

The other way I get coconut oil absorbed into my body is through my oral mucosa… I love oil pulling for the health of my gums and teeth and to loosen and remove tartar and plaque… and knowing I’m getting absorption of coconut oil daily doesn’t hurt either.

All you do is take a small amount (I use approximately a heaping teaspoon) of coconut oil and swish it around your mouth for as long as you can stand before you brush.

Many folks recommend doing it first thing in the morning but as you know from the health benefits of coconut oil, any time you can do it is a great time to do it!!! If you can keep it swishing around your mouth for 10 – 20 minutes, you will have the most shiny, clean, white, sparkling teeth on the planet by the time that you spit it out and brush.

Beware, the oil gets foamy and frothy as it mixes with your saliva… just keep on keepin’ on as long as you can.

I generally take a mouthful of coconut oil in the shower with me and swish it around the entire time I shower… then come out and spit and brush my teeth. It might not be a full 10 minutes but it is so much better than not doing it.

Although some folks report oil pulling is a fabulous way to detox (and it very well might be!) I am just in love with it for the results I’ve had on my gums and teeth (gums are filling back in, less receded, less sensitive… teeth are whiter and cleaner!) and knowing that I’m getting coconut oil into my body in every way possible.

I’ve seen reports that people literally have entire chunks of old plaque build up from the back of their teeth literally fall off into the sink after oil pulling and brushing for a few days in a row — sick but true!

Vitamin D deficiency is one of the key players in developing senile dementia. You do not want to be Vit D deficient, my friends… high levels of Vit D have been shown to decrease the incidence of everything from heart attack to stroke.

But on top of this, Vitamin D has been actually shown (and I believe it is the only thing on earth so far to have shown this…) to clear amyloid from the brain. As you may know, amyloid in the brain is a hallmark of Alzheimer’s Disease… so yes, I am literally saying that a nutritional supplement has the power to clear and reverse a major component of Alzheimers.

This is amazing news!!!! Why hasn’t it been shouted from every rooftop and all over the news? I have no idea. But this is big, peoples!

So not only is Vit D a great idea to supplement while you are young and healthy, but it becomes critical and essential to use for brain health as we age and even for those already headed into Alzheimers.

Here is a list of my fav ways to get Vit D supplements in… from children to adults.

So my Alzheimer prevention plan? Lots of unprocessed amazing oils like olive oil and coconut oil, daily oil pulling, an occasional glass of red wine and lots of vitamin D supplementation. It also doesn’t hurt to keep you mind as alert and active as possible… less stuck in routines. Remaining open minded and learning new things all the time is something I blogged about last week, and reducing stress on the brain is something I’ll be blogging about on Wed, so stay tuned for that.

And my plan for Alzheimers treatment, should it come to that? Starting each day with a large scoop of coconut oil for brain food, and Vit D supplementation throughout the day to help clear amyloid deposits in the brain.

Did you know that there is an association between loss of sense of smell and dementia?

Researchers are looking into it right now… trying to see if they can use smell tests as screening for Alzheimers.

I thought that was an interesting and non-invasive potential screening test. The problem seems to be that loss of smell is not specific to Alzheimers but instead occurs with all dementia, including Parkinsons, traumatic brain injury and other frontal lobe dementias.

So it is not specific to any particular form of dementia. Nevertheless, if you notice a loved one complain of loss of smell, this is something to keep in the back of your mind, as there is a definite association.

See you Wed for our last post in my ULTIMATE BRAIN HEALTH series! I hope you’ve been enjoying it… leave me a comment below and let me know! Have a topic idea for another ULTIMATE HEALTH series? Let me know that too!